Ring of Fire | The Life and Music of Johnny Cash 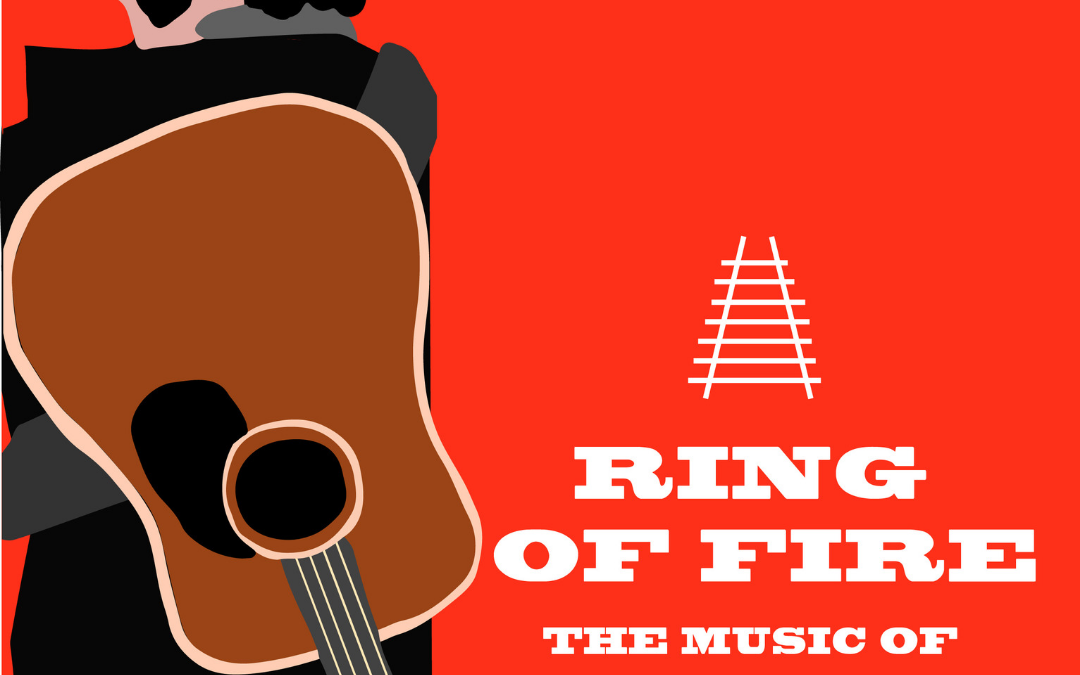 The first show of the 2019/2020 season is Ring of Fire! It’s a musical adventure woven together by the legendary songbook of Cash himself, and studies a deeper narrative on love, generational living, and redemption.

Origins
Growing up the son of an Arkansas farmer, the South Johnny Cash knew was one of blatant racism and hate. In fact, the men in Cash’s family took pride in their participation in the hatred expressed towards the state’s Black population. It wasn’t until two years after Cash left for the military that Brown v. Board of Education began to unravel the Jim Crow South. His childhood environment provided a strong example of why social change is necessary.

While Cash never claimed to be directly abused by his father, the psychological consequences of the man’s arbitrary killing of innocent animals from cows to puppies certainly took its toll. Perhaps it even contributed to Cash’s lifelong struggles with addiction (Tunnell and Hamm, 271-272).

In 1950, Cash joined the military during the Korean War. Deployed in Germany, he became a Morse code decoder. While deployed, he started a band with fellow soldiers named Landsberg Barbarians with whom he first performed his original “Folsom Prison Blues”, inspired by a film about the prison (Hackett).

His first Grand Ole Opry performance was on July 7, 1956 (Leahy). Later, he met his second wife, June Carter, at the Opry. Cash’s fame began to decline in 1967  (Tunnell and Hamm, 277), but he overcame his addictions once again, and continued producing records until his death on September 12, 2003.

Throughout his career, Johnny Cash created an outlaw image, an alter ego in the form of “The Man in Black.” While in reality, Cash never served hard time or killed another man, his ability to deeply empathize and tell simple yet profound stories through song built a bond with the outcasts of society. Although he didn’t directly share circumstances with the inmates of the prisons he sang for, he also felt like an outcast and struggled with demons that many people wanted to ignore.

The Tennessee Two (Grimes)
Originally car mechanics, Luther Perkins and Marshall Grant were introduced to Cash through his older brother Ray. As they began to play together, they realized three guitars playing rhythm drowned out their dynamic sound. To remedy this, Grant bought a cheap bass that he couldn’t play and Perkins borrowed a Fender Telecaster. This experiment resulted in the iconic “Johnny Cash Sound”. The “boom-chuck” or “boom chicka boom” sound comes from alternating bass by playing a 5th below the root and then strumming the chord (Grampp).

The two former mechanics became the Tennessee Two, playing with Cash at the Grand Ole’ Opry and traveling with him. In 1960s, W.S. Holland joined as the drummer, and the band rebranded as the Tennessee Three.

Marshall and Perkins supported Cash until their deaths. Marshall, in particular, became Cash’s right hand man as he helped the performer through addiction and onto the stage.

Influences
Cash was particularly inspired by Merle Travis’ “Folk Songs of the Hills” a 1947 recording which in turn was inspired by Earl Robinson the famed author of American labor songs (Blau). In “Folk Songs”, Travis replicates Robinson’s skill for telling stories through song (Sullivan, 204). Cash was also influenced by Alan Lomax’ “Field Recordings”. As an ethnomusicologist, Lomax traveled the nation recording the organic voices of American folk music. (Tunnell and Hamm, 273).

While Cash was certainly a Country performer, he leaned he leaned more heavily into his folk music roots than the Grand Ole Opry preferred, resulting in his abandonment of the famed stage (Tunnell and Hamm, 272-273). Some would say Cash laid the foundation for the later movement of Folk Rock, becoming the first mainstream crossover artist.

The style developed by the Tennessee Two allowed Cash’s strong baritone voice to become the focus of their music. But the greatest hallmark of his songs are the lyrics. The words force his audience to come to terms with truths they try to ignore, and contemplate the choices they’ve made. When discussing the art of songwriting, Cash saw his greatest skills as writing simply because he wanted to, with the single intent of capturing a feeling (Hackett).

Beginning his performance career in 1954, and only ending with his death in 2003, Cash remained relevant and engaged with his audiences. Throughout his life, he showed great skill in expertly transitioning with culture as it evolved.

While one of his most famous lyrics may be, “I walked the line,” one thing Cash never did, was walk a line. As Merle Haggard wrote, “Johnny Cash was out of line all his life. He never walked any line,” (Tunnell and Hamm, 271). Because of Cash’s skill in evolving and his penchant for walking both sides of the cultural line presented to him, he never defined himself as a single thing. From his disregard of musical guidelines, which resulted in a place in both the Country and the Rock and Roll Music Halls of Fame (Hackett), to his frequent relapses  into addictions interspersed by returns to his religious convictions.

Cash’s Criminological Philosophy
Cash grew up in a society that was rapidly changing it’s perspective on crime and perpetrators (Gerkin et al, 154-158). In keeping with his individualistic approach to life, Cash developed his own unique understanding of crime and punishment. In many ways, the songwriter manages to retain each criminal’s dignity, while simultaneously charging them with the responsibility of the crime. In a paper written about a line by line analysis of 60 Johnny Cash songs, the researchers described Cash’s philosophy, “While not versed in criminological theory, Cash nonetheless sang eloquently of a rational choice model of crime in which offenders accepted responsibility for their acts, punishment was justified, and yet incarceration should be humane and rehabilitative,” (Gerkin et al, 152).

On the one hand, Cash’s lyrics show the perpetrators accepting full responsibility (and occasionally blaming the murdered party), as it was their choice to kill. While on the other hand, his in person reactions reflect a different perspective: “My only certainties are that I grieve for desperate young men and the societies that produce and suffer so many of them…” (Tunnell & Hamm, 275). Later, quoting Barnes, Gerkin et al write, “The point is just that every one of us is capable of doing something wrong if we are placed in the wrong situation…We should hold them responsible for their actions but we should not automatically condemn them as people,” (176).

Cash viewed prisons as providing necessary punishment, but recognized the irrationality of taking everything away, including human dignity, from an inmate and then hoping they would successfully rejoin society.

Prison Reform
In the 1960s and 1970s, American youth culture began a movement of social reform (Tunnell and Hamm, 279). Cash followed that wave with the encouragement of his minister , holding his first prison concert in 1957 (Stewart). Almost ten years later, he performed outside the walls of Folsom Prison for the first time, with the Carter Family (Tunnell and Hamm, 278). This hatched the idea of recording an album inside the walls. In 1967, Cash’s career had gone into decline following his increased addiction. However, in early 1968, his producers finally agreed to record what later became his best selling album: “At Folsom Prison.”

Cash seemed to feel a sense of connection with the prison inmates. He sang their stories with such understanding and empathy, that they accepted him as one of their own. Although Cash never actually served hard time, he never discredited the myth (Tunnell and Hamm, 277). Perhaps Cash felt a kinship with the outcasts of society because of his own struggles with addiction, which much of society prefers to ignore.  “According to the National Registry, ‘Cash and those gathered seemed to feed off each other. Together, they engaged in a musical tour de force of passion forgiveness and redemption,’” (Law, 28). With the prisoners, he was one of them, not an idol or a symbol of perfection.

In turn, Cash treated the inmates as humans who had made wrong decisions rather than dangerous criminals. His concerts were a partnership with his audience. He didn’t simply perform, but deeply engaged with his audience.

Cash didn’t stop at public performances but continued his work toward prison reform. In particular, he connected with Glen Sherley, author of “Greystone Chapel” and serving time for armed robbery. He successfully supported Sherley’s release, and hired him as a songwriter. While Cash fully believed in Sherley’s skills, Sherley struggled to live up to expectations, subsequently leading to his removal from the team and his suicide a few years later. Sherley’s digression provides an example of Cash’s idealistic hope of rehabilitating prisoners as well as satire of America’s failed prison system that resulted in the demise of a talented man who did not know how to live in the world even with the support of an American icon. (Stewart)

Prison reform was not Cash’s only justice effort. He also worked to give a voice to Native Americans, especially through the song “The Ballad of Ira Hayes”, about the Pima Indian who helped raise the American flag on Iwo Jima. While Cash raised money to build a school, his greatest mission was to give a voice to those forgotten. (Tunnell and Hamm, 274)

As time went on, national sentiment moved away from prison reform and so did Cash’s music and involvement (Stewart). With this turn of support, the prison population grew more dangerous and hopeless, once again abandoned inside the walls.

Current Efforts of Prison Reform
While it is easy to celebrate Johnny Cash’s work in prison reform, reality has only become worse for those incarcerated in America’s industrialized prison system. In fact, according to the Sentencing Project, in 1980 when Cash and the United States ceased their involvement in the prison movement (Tunnell and Hamm, 280), the number of people incarcerated rapidly climbed from several hundred thousand to over a million and a half, an increase of 700% since 1970 (aclu.org). Perhaps even more disturbing, is the fact that both the United States and Michigan have more individuals imprisoned per 100,000 people than every other country in the world (Wagner and Sawyer).

And yet, there is hope. The ACLU’s current effort is called “Smart Justice” and is a campaign primarily focused on reducing incarceration rates by 50%. This entails a reform of all components of the justice system from helping prosecutors identify less harmful sentences to improving the parole and release processes. (aclu.org)

We have a long way to go before the prison system is truly just for all people, but many are working to bring light to the forgotten. Johnny Cash used music to connect with an outcast population and we would do well to remember the power that music has to bring healing, motivate change and build unbreakable connections.