Audition at Grand Rapids Civic Theatre for the 2022-23 Season

JOIN US FOR… TEN FOR ALL!

Registration is now OPEN for TEN FOR ALL!

Grand Rapids Civic Theatre is holding auditions for their 2023 Ten for All Playwriting Festival on Friday, February 17th from 6-9pm! Civic is seeking up to 15 actors ages 8-Adult for their five semi-finalist scripts. Roles are open to individuals of all races/ethnicities and gender identities.

CLICK HERE for Audition Registration Information and to make your appointment today!

ABOUT TEN FOR ALL: Back for its third year, the Ten For All festival will present original 10-minute plays written by West Michigan playwrights. In 2021 and 2022, the inaugural festival received over 100 submissions for plays in several categories. These plays were anonymously read and scored, then adjudicated by local theatre experts and media and business leaders. The top plays in each category were performed live on stage at the Meijer Majestic Theatre, and audience members voted to give one playwright the coveted “Audience Choice” award. In 2023, we’re back to do it all over again, with local actors bringing world premiere scripts to life!

YOUTH GRADES 9-12: In Your Defense By Peter Bryant

Callbacks: Sunday, February 19th from 1-3pm (If necessary, and by invitation only)

Rehearsals Begin: Monday, February 20th | NOTE: Each play will only rehearse a few days a week. We expect each show to rehearse 10-12 hours TOTAL prior to Tech Week.  The Tech Week Schedule will be solidified after the order of shows is determined, but actors should expect to be at Civic 2-3 hours EITHER Monday 3/13 or Tuesday 3/14 and 2-3 hours BOTH Wednesday 3/15 and Thursday 3/16. Please leave evenings free that week!

JOIN US FOR… SOMETHING ROTTEN!

Registration is now OPEN for SOMETHING ROTTEN!

Grand Rapids Civic Theatre is holding auditions for the musical SOMETHING ROTTEN! on Friday, February 10th from 6-9pm and Saturday, February 11th from 5-9pm.  Auditions are open to the public.  This production features a cast of 20+ adults (ages 16+) of all gender identities and ethnicities.

CLICK HERE for Audition Registration Information and to make your appointment today!

ABOUT SOMETHING ROTTEN!: Welcome to the Renaissance and the outrageous, crowd-pleasing musical farce, Something Rotten! Set in the 1590s, brothers Nick and Nigel Bottom are desperate to write a hit play but are stuck in the shadow of that Renaissance rock star known as “The Bard.” When a local soothsayer foretells that the future of theatre involves singing, dancing and acting at the same time, Nick and Nigel set out to write the world’s very first musical. But amidst the scandalous excitement of opening night, the Bottom Brothers realize that reaching the top means being true to thine own self, and all that jazz. Book by Karey Kirkpatrick and John O’Farrell. Music and Lyrics by Karey Kirkpatrick, Wayne Kirkpatrick. Rated PG-13 for adult language and content. 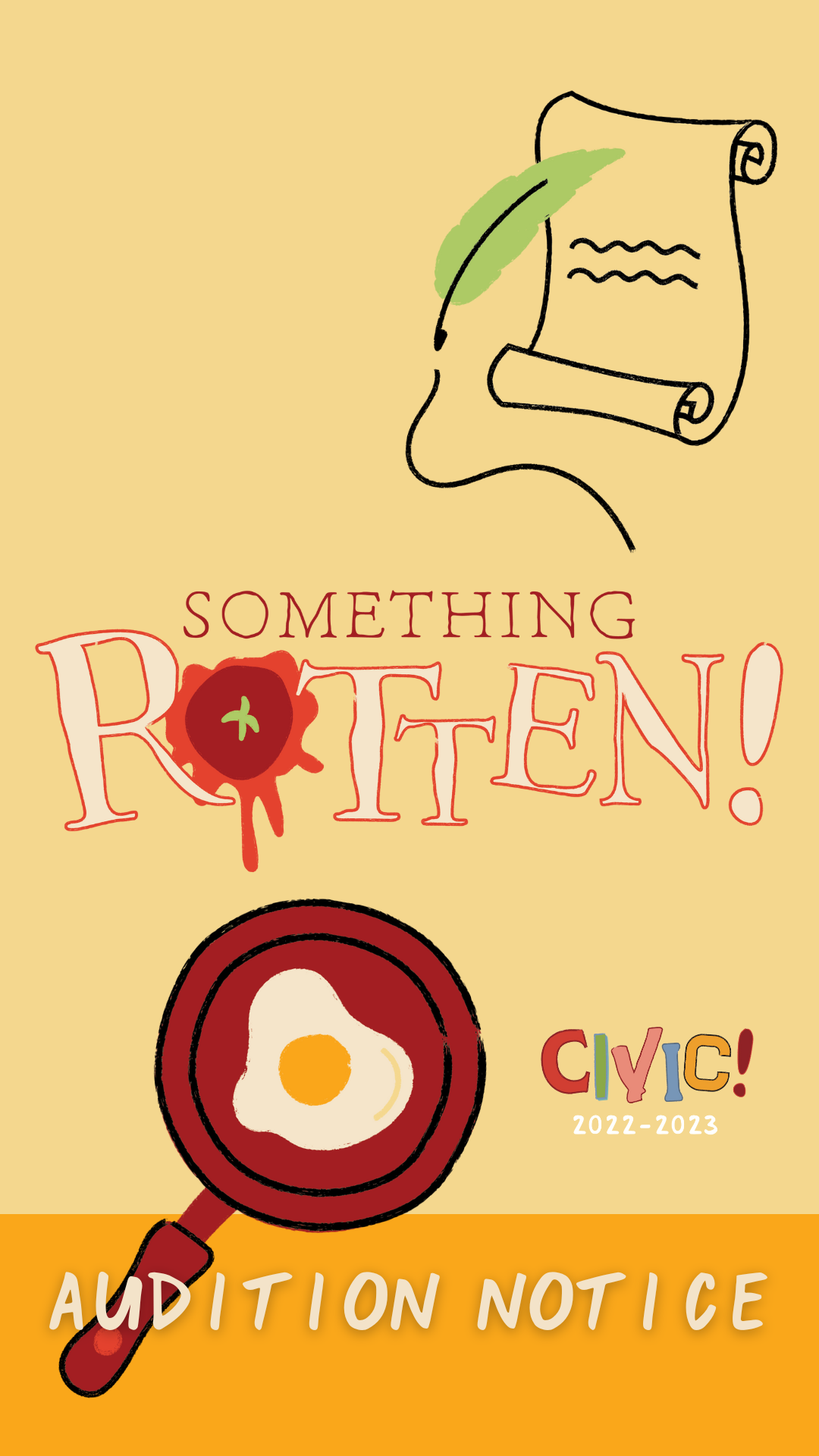 Auditioning for a Show…

Is there a place for me?

Grand Rapids Civic Theatre is a community theatre, which means that all the actors who perform on our stage are a collection of individuals from West Michigan who have a talent and interest in theatre arts. Whether you’re a novice or a seasoned actor, you are welcome to audition at Civic! It’s not uncommon for newcomers to be the star of the show, or a part of the ensemble! On average, approximately 40% of Civic’s volunteer performers are new, either to our community or our theatre. GRCT welcomes all genders and non-conforming individuals, all races and ethnicities, and artists of all ages. With each season offering a variety of musicals and plays, we are excited to offer a little something for everyone.

This page is your best resource for updated information regarding audition dates and times, casting needs, and rehearsal schedules. All sign-ups are done through SignUp Genius, which will be posted as they become available.

What to expect at an audition

Those planning to audition for a Play will be asked to read from the script. For Musical auditions, prepare 16 measures of a memorized song and bring sheet music that includes a piano accompaniment line. Musical auditions will also include a dance audition. For specific details on how to prepare and what to expect, the SignUp Genius page for each show will include an audition guide.

What to expect at a callback

Civic Theatre’s School of Theatre Arts offers workshops and classes designed to help you prepare specifically for an audition. Please check our current Education page for information and availability on upcoming classes.