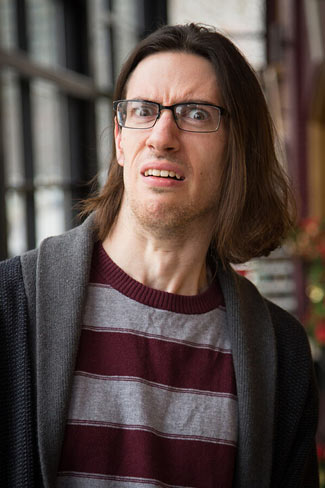 Jon Calkins started tap dancing in 2007. His passion for dance has brought him to the Civic Theatre stage as well as many other venues in Grand Rapids. Jon has appeared with Atelier Dance Company, Grand Rapids Dance Ensemble, Grand Valley Dance Troupe, and Tap24.7, and has continued his dance education at Body Language Dance Company and at special events like Motor City Tap Fest and Wing It Tap Intensive. Jon choreographs for East Grand Rapids High School, and takes every opportunity to show off his love for tap and performance art at festivals like Electric Forest and Theatre Bizarre. Jon is also an aspiring circus acrobat, an avid electronica enthusiast, a fun uncle, and an attentive plant dad.

What inspires you?
Music and stories!  Music tells stories in a way that words alone can’t.  I feel irresistibly compelled to move by the rich and unique stories that live in song.

Who is your favorite fictional character?
Prince Zuko from Avatar.  No spoilers, but the way he grows up and becomes the man he really wants to be is beautiful.  His story is a great example for all of us; it demonstrates the value of support, compassion, vulnerability, forgiveness, and begin true to yourself and others.

What was your favorite after school snack growing up?
Zebra cakes and oatmeal cream pies.  Not at the same time, though!