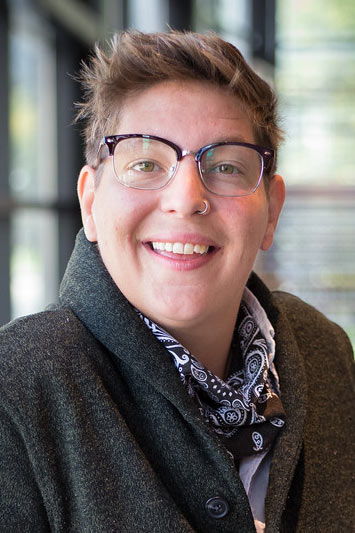 Eirann Betka-Pope (they/them) is a producer, artist and activist in Grand Rapids. They represent one-half of Betka-Pope Productions, and founded and serve as a guide at GR Crime Tours.

Eirann also founded Funny Girls where they serve as President, and is the former owner and Artistic Director of The Fuse Box. Helping to create The Comedy Project, they also served as Theatre Manager, a writer, performer, producer, and instructor there. Eirann was also a founder and committee member of Grand Rapids Improv Festival, and started Comedy Outlet Mondays where they took on the roles of producer, host, writer, and news anchor at NewsFlash!.

They currently teach at The Grand Rapids Civic Theatre School for Theatre Arts, and continue to produce projects through BPP, as well as instruct cooperate and public workshops. In their spare time, they enjoy travel, being outdoors, cooking, and spending time with their dog, Cornelius.

What inspires you?
People

Who is your favorite fictional character?
Yukon Cornelius

What was your favorite after school snack growing up?
Shredded Coconut or anything chocolate