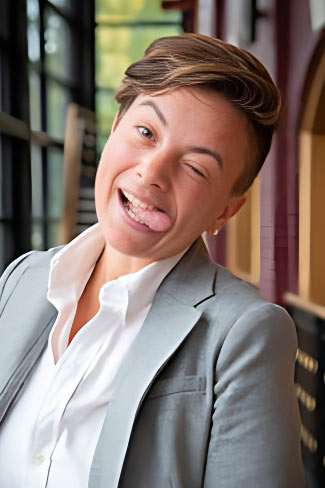 Brittany Devon (they/she) is so excited to become a part of the Civic family. Brittany has spent the last three years living in Chicago. They are a graduate of The Second City conservatory, Black Box Meisner and viewpoints program, and is currently training in NYC at Terry Knickerbocker studio (virtually!). Brittany has also trained at many other schools and theaters around Chicago. They have a BSBA from Aquinas College and began a non-profit called United Coalition for Change to grow and build inclusive environments and education. A few years ago before Chicago, they played on stage in GR at Dog Story (self-produced plays) as well as at Circle Theatre (Snow White). They were also an arts and entertainment reporter for The Rapidian.  Brittany loves spending time in nature with their pets. They love deeply connecting through the art of this craft of acting and are so excited to continue to grow as an artist and human alongside this community.

What inspires you?
Nature, my animals, and truly being present with people

Who is your favorite fictional character?
Mabel Pines

What was your favorite after school snack growing up?
My mom’s secret stash of Hot Tamales