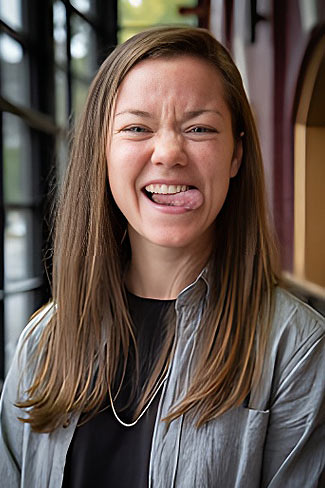 Fiona Campbell is so excited to join the Civic community. She is happy to be back in her hometown of Grand Rapids and teaching with Civic Theatre after living in Chicago. There she graduated from The Second City’s writing program. She has been a part of writing rooms for sketch comedy shows in Chicago, New York and LA. She also studied screenwriting all over Chicago and has been writing film and tv for years. In 2021 Fiona became a producer when she co-founded a production company called She Them Productions. This is a platform for underrepresented people to tell their stories, with an emphasis on queer representation. She is so excited to create a safe and fun space for her and her students to learn and create together.

What inspires you?
Trees, my dogs and my found family

Who is your favorite fictional character?
Winnie the Pooh

What was your favorite after school snack growing up?
Hostess HoHo’s and King Dons