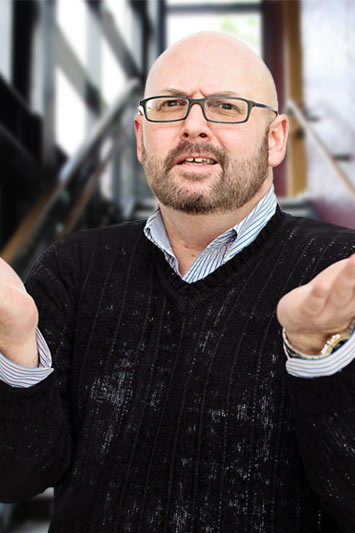 Scott’s favorite thing about teaching at Civic, is getting to see his students grow. Watching a student discover what is inside of them, process and develop skills, and then strengthen themselves to create confidence. To be there when somebody’s life changes in so many positive ways…it is truly one of the best things in life.

What inspires you?
I am inspired by cultural exchanges, be they musical, culinary, visual, or just listening to someone tell a story. The idea that we all innately share the same DNA, but vary in groups as cultures…and even more as individual artists, is remarkable to me.

Who is your favorite fictional character?
The Vampire Lestat.  I love reading historical fiction. When I was in college, I discovered Anne Rice’s vampire chronicles. I was hooked. The idea that one could live through centuries of history, meeting Beethoven, Mozart, Napoleon, or watching the first movie, first flight, seeing eras of human development…that’s so cool to me! Yes, when I grow up…I think I want to be a vampire.

What was your favorite after school snack growing up?
Pudding cup, in a little can. Both of my parents worked, when my brother and I were kids. The best score, was finding one of these little gems in your lunch, or finishing the last one, as your brother watched in absolute anguish. As an adult, one of my favorite desserts is Creme Brulee..which kind of is still pudding if you think about it.