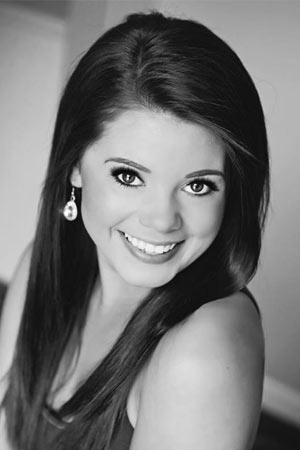 Olivia graduated from Hope College in 2013 with a Bachelor’s Degree in Psychology and Communications. While at Hope, Olivia was the captain of the Co-Ed Varsity Cheerleading team, played Clarinet in the Wind Ensemble, and was very involved with volunteer opportunities on campus and in the town of Holland.

After graduation, she moved to Orlando to work with The Walt Disney Company as a Face Character Performer; performing in parades, shows, meet-and-greets, and character events. While with Disney, Olivia performed many roles, but her favorite was flipping her fins with Princess Ariel.

In 2016, Olivia married her college sweetheart, moved to Holland, and adopted two puppies, Lincoln and Tilly Mae. While also pursuing a Masters degree in Human Resource Management, she is actively involved with the Grand Rapids Civic Theater as a teacher and performer.  She is also the owner of Everafter West Michigan; a company dedicated to bringing magic to West Michigan through Character Entertainment.

Olivia believes so strongly in the importance of keeping the Arts alive, and is thrilled to be joining the Grand Rapids Civic Theater Teaching Staff!

What inspires you?
Passionate people

Who is your favorite fictional character?
Albus Dumbledore

What was your favorite after school snack growing up?
Graham Crackers with Frosting