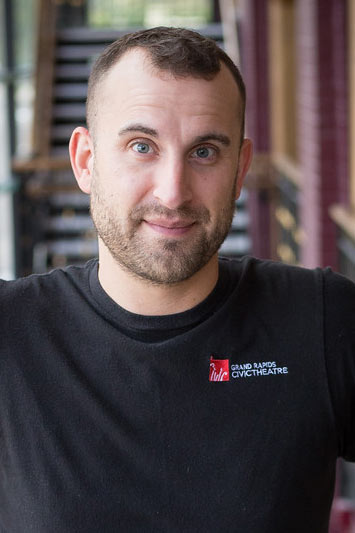 Born and raised in Grand Rapids, John found his passion for theatre in high school, performing in many productions at GR Catholic Central. In college, he double-majored in Theatre and Speech Communications at Siena Heights University, and earned his M.A. in Theatre Arts at Eastern Michigan University in 2013. John has appeared in several community theatre productions throughout Michigan including Grand Rapids Civic Theatre, Actors Theatre, and Pigeon Creek Shakespeare. His graduate study focus was in directing, and he has staged several productions since. In New York, among many other experiences, John house managed for the Broadway production of The Fantasticks, and is currently the Experience Manager at Circle Theatre, as well as an adjunct instructor at both Aquinas College and GRCC.

What inspires you?
Reading and learning about people who have taken risks to make the world a better place.

Who is your favorite fictional character?
Data from Star Trek, TNG

What was your favorite after school snack growing up?
Bagel Bites