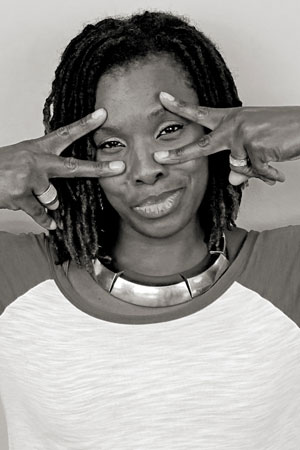 Channelle Battles is a phenomenal woman and native of Grand Rapids, MI. She is best known for her wit, tenacity, and fearless attitude. Channelle is a proud mother and she gives thanks to her partner who has been a consistent source of support and encouragement. That has enabled her to pursue her love of acting with passion and vigor. Being a mother and partner have helped shape her character on and off the stage. While pursuing her dreams she graduated from Western Michigan University receiving a Bachelor of Arts in theatre performance. She rose from modest roots to become a distinguished and performer in her own right.  Channelle has had featured roles in several major films including SilverBells, Perfectly Prudence, The Set up, A Good Man andThe White Bag.

She also has numerous television, theater and commercial credits to her name. She has worked with such greats as Antonio Vargas, Bruce Boxleitner, Kenton Duty, Jane Seymour, Ryan Phillippe, Bruce Willis  and John Lando to name a few.

Channelle continues her quest pursuing her dreams. She looks forward to working on Broadway and or in any feature opposite Denzel Washington, Whoopi Goldberg and Angela Bassett. I love working at Civic because it allows me to extend parts of my creativity to teach and educate students to embrace art in their unique way and apply it on the stage.

What inspires you?
Taking a risk inspires me. Anything that seems like a challenge.

Who is your favorite fictional character?
Black Panther

What was your favorite after school snack growing up?
Fruit & Candy to have balance LOL