Broadway at the Ballpark 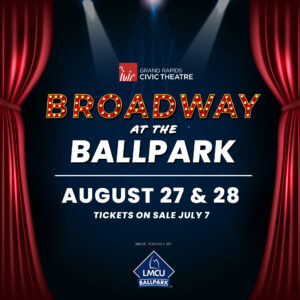 Broadway at the Ballpark

Grand Rapids Civic Theatre is thrilled to announce the return of their collaboration with LMCU Ballpark to bring live theatre to the ballpark in August. Broadway at the Ballpark is scheduled for August 27th and 28th with shows at 7:00 pm each night.

The 2021 event will build on the success of the 2020 concert and will feature world-class entertainment and bigger and better entertainment experiences for all ages. The concert will feature Broadway favorites performed by Civic Theatre actors. This year, the event will also include more musical numbers, greater seating capacity, and an expanded selection of food and beverage, including beer and wine.

Tickets are $20 for adults and $15 for youth aged 3-15. Children 3 and under are free. Guests will bring their own chairs and be seated in the outfield of LMCU Ballpark. VIP Access begins at 5:30 pm. Gates will open at 6:00 pm, and a special performance from the cast of Grand Rapids Civic Theatre’s production of the musical Once will take place at 6:30pm. The concert will begin at 7:00 pm. Tickets are on sale now, and will be available online and at the LMCU Ballpark box office.

Civic Theatre is returning to regular live performance after the pandemic closed its doors for nearly 18 months. As they prepare for their 2020-2021 season in September, they are returning to the ballpark for another outdoor show.

Broadway at the Ballpark was born after both Civic Theatre and the West Michigan Whitecaps were forced to cancel regular programming in 2020 due to the pandemic. The inaugural event was a hit among guests, and both parties agreed it was something the community would love to see again in 2021.

VIP packages will be available for purchase for the event for $150. The packages include a table for up to four guests, early entry, VIP parking, and an all-you-can-eat meal plan in the General RV Campground.